Maxwell Gomera, UN Rwanda Resident Coordinator, said that while the UN failed Rwanda during the 1994 Genocide against the Tutsi, it holds the national transformation and resilience of survivors in high regards.

“Your country offers an example of how countries can act in a coordinated and collective fashion, with greater sense of urgency towards achieving our global goals,” he said.

Gomera explained that it is with collective action that governments can resolve global problems and achieve global self-interests while also sustainably driving national economic transformation.

The celebration also featured panel discussions that reflected on Rwanda’s development trajectory and its contribution to UN peacekeeping and peace building efforts.

Up to now, Rwanda has contributed 73,569 military personnel in different UN peacekeeping missions in different countries.

Mbaranga Gasarabwe, Former Deputy Special Representative of Secretary-General to MINUSMA, said that Rwanda’s uniqueness in peacekeeping is rooted in values of finding inner solutions that tackle root causes of conflicts as well as consistency in implementing peace policies.

Rwanda was admitted as a member to the UN on September 18, 1962 following the adoption of Security Council resolution.

Within 60 years, Rwanda has partnered with the UN across a broad range of thematic areas that have contributed to the social, political, and economic transformation of the country. 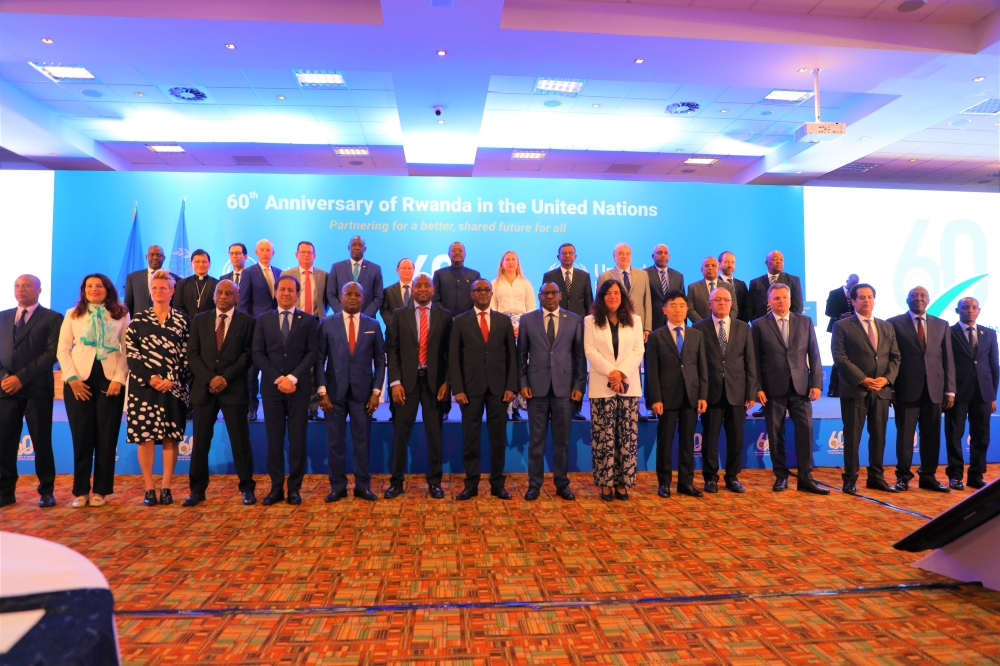 Officials in a group photo during the he celebration of the 60th anniversary of Rwanda’s membership in the UN in Kigali on October 24. Craish Bahizi
Alice Kagina